For Chip Babcock, every case has two levels—one that appeals to the jury’s sense of fairness and understanding of the law, which depends more on social science and how the jury solves problems, and one that the judge will apply by applying the legal standard. In First Amendment law, he often cites as an example the fact that a newspaper does not legally have to be fair to a subject. It can’t knowingly publish false information, but it is within its legal rights to not be fair. “The thing is,” he says, “jurors don’t believe that.” The story presented must resonate with the values a juror brings to a panel, while falling within the realm of the law and a jury’s sense of what is right, even if that sense doesn’t logically follow the law. Chip Babcock’s success hones in on this dexterous grasp of the nuances a trial attorney must apply when delivering to the court and appealing to the minds of the jurors.

In his 30-plus years in practice, Chip Babcock has risen as a nationally recognized First Amendment lawyer, representing major media household names on some of the highest-profile, game-changing libel and defamation cases in recent memory. He has tried nearly 100 jury cases, winning most of them, including many precedent-setting decisions. His roster of notable clients includes Oprah Winfrey, Dr. Phil, Warner Brothers, Inc., FOX Entertainment Group, Bill O’Reilly, Diane Sawyer, Univision, and the Chicago Tribune.

In 1998, and again for a separate matter in 2002, he argued for and won on behalf of Oprah Winfrey, defending the media mogul in a suit by a Texas cattleman who alleged one of her show’s episodes violated Texas law under the False Disparagement of Perishable Foods Products Act. He has handled many cases for her since.

He served as lead counsel for Dr. Phil in a First Amendment case centered on the California Retraction Statute against the Kalpoe brothers, onetime suspects in the murder of Natalee Holloway. In January 2013, the California Court of Appeal found that the state’s retraction statute applied to all television broadcasts and not just breaking news, another precedent-setting decision. Eventually the case was dismissed in favor of Dr. Phil.

In 2006, he represented the Honorable Nathan Hecht, the Chief Justice of the Texas Supreme Court, following Hecht’s citation for speaking in favor to the media of Harriet Meyer’s nomination for the United States Supreme Court in 2005. The matter went to court, and the three judge court dismissed the sanctions against Hecht as a violation of First Amendment law. 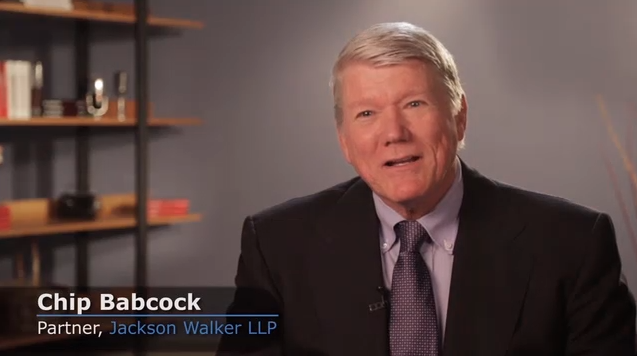 Chip Babcock discusses the “chilling effect” that occurs when people cease to exercise their First Amendment rights for fear that the government will seek legal retribution.